The Rutland Baptist Church was officially organized on June 23, 1890, in Highland Township, now known as Shuman Township, with nine charter members: Mr. & Mrs. Lars Loo, Peter Forsberg, John Swanson, Mr. & Mrs. John Berquist, Ole Nordstrom, Mrs. Erick Olson and Mrs. Wilhelmina Erickson. There are no charter member descendants now living in this community. The church was incorporated under the name “First Swedish Baptist Church of Rutland, North Dakota." Meetings were held in the Rutland hardware store, located a half block west of Main Street. The Church was without a pastor for nearly three years and members led the meetings. The first pastor, Rev. Nord, began services in 1893. Crop failures and hard times made it necessary for him to follow his trade as a jeweler to support his family. When he left, Rev. Sutherlund was called in 1894. Membership reached 60.

The Baptist Church building, located at 205 Second Street, was bought by the church in 1895. The building was originally constructed as a hardware store in 1887 by John and Mary McNutty.

The most critical time in the history of the church occurred in 1900. Due to various conditions, nearly all the members of the church left and only five remained. Most of the members immigrated to Canada. The building was almost in ruins and impossible to keep warm and comfortable. At this time Rev. Larson, a missionary who had helped out a number of times, offered his assistance. He surveyed the situation and set out to remedy the problem. He visited people in the community and raised $233 to renovate the church building. That fall the church was fixed up in a very comfortable manner at the cost of $500, and all got paid. No one seemed to know where the rest of the money came from. It seemed as is it came directly from the Lord.

By 1915, some families from South Dakota moved into the community and united with the Church. The Carl Christensen family was among them. This was the beginning of a new upward trend, which continued slowly, but gradually, for many years. In 1919 the church building was renovated and enlarged, including the addition of a kitchen.

Rev. Ludvick Hersgard, who was converted through the ministry of this church in 1922, was called to be its pastor in 1930 after seminary training and a pastorate in Ohio. He, together with his wife, Edna, served here until 1937. During this time the membership increased to 89 and there were as many as 120 enrolled in Sunday School, with an average of 92. The ND Baptist Bulletin noted that 300 people were in attendance at  the Christmas programs and that “Julotta” services were often held at 6:00 a.m. on Christmas mornings.

The need for a new church building became apparent in the 1930's and a building fund was established. In October 1935, a church building located near Kidder, SD, was purchased for $200 and moved to the present site on First Street. The land on which the church is located was donated by Mr. & Mrs. Emil McLaen. A dedication service was held June 20, 1937.

In June of 1938, Rev. Simko and his bride, Ina, came to serve. They were the first pastor and wife to live in the new parsonage across the street. He also served the Baptist Church in Lisbon. Rev. Simko diligently worked to raise funds for building supplies and found the physical labor to work on the new church. As people labored on the new building, they enlarged it, and then completed the basement so it could be used for services. The basement was ready in 1939 and continued to be used until the upstairs, sanctuary and entire building was completed in the spring of 1940.

A number of people left the area in the late 40's to seek employment and among them were many of the church members, which led to a decrease in membership.

In 1953 new chair pews were purchased to replace the uncomfortable straight wooden pews from 1940. The plain glass windows were also replaced with the amber glass windows at this time.

With more church families leaving the area and membership decreasing, a full time pastor could not be supported. The parsonage was sold in 1972.  Since 1978 the three-church parish shared a pastor with the Lisbon Church.

Although the membership of the Rutland Baptist Church was never large, it was been a faithful institution in bringing God’s Word to the community. It leaves one in awe to read the minutes of the past. So many times the church was without a pastor and the Lord provided someone to hold services. There were also lay people who were willing to conduct the service and give testimony and a message, while others helped out with their musical talents.

It is appropriate to give a fitting recognition to the faithful laborers of the past. Many others have been and are still diligent in helping in the work of the local church in various ways. Many former members have taken responsibilities of leadership in other congregations and made contributions to their present churches when they moved away from the little church in Rutland. May all of us be ready to share our faith when the opportunity is presented.

(Adapted from “A Century of Sharing The Gospel”, by Edith Malpert and Violet Wyum.)

The Baptist Church was sold and many of the interior items such as the pews and furnishings were sold by the new owner. 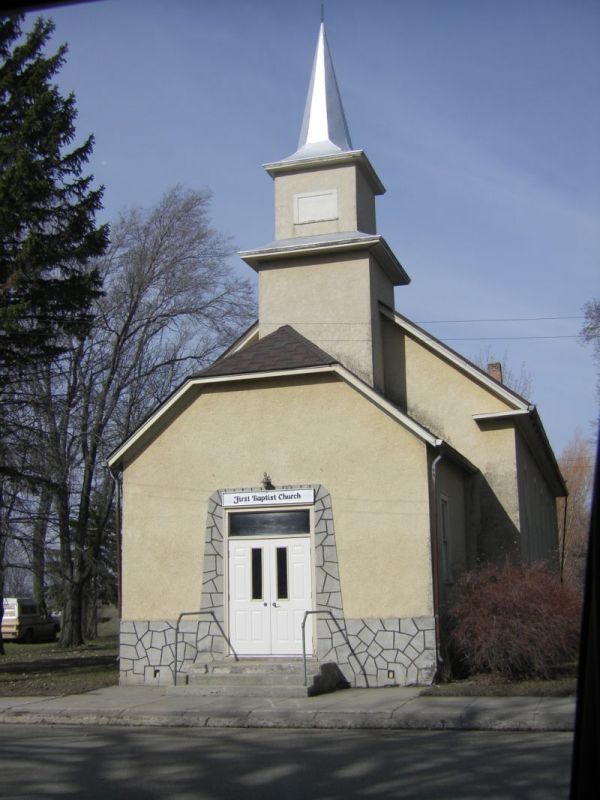