In 1886 the Great Northern Railroad track went as far west as Rutland. The following year the railroad was extended southwest to Aberdeen and west to Ellendale. During this year, the Great Northern had a complex of buildings constructed in Rutland including the depot, a water tower, coal dock, roundhouse and section house, to service its equipment and serve its customers. The business half of the railroad was to move passengers and freight, and the east half of the depot was a freight warehouse and the west quarter was a passenger waiting room. The office was located between the freight house and waiting room. Telegraph operators were on duty round the clock to send and receive messages and to relay messages to stations on the Aberdeen and Ellendale lines. Two freight trains and two passenger trains stopped in Rutland each day on the Aberdeen line. Another train originated in Rutland and made a round trip to Ellendale daily. The Ellendale line was extended to Forbes, ND, in 1905 and was known as the Forbes line thereafter.

Mr. Bagley was the Great Northern’s first agent in Rutland. He gave his name to one of Rutland’s streets and is said to have contributed the name of his home town, Rutland, Vermont, to the new village on the prairie. At that time the agent's pay was partly based on the volume of business transacted at his station. Because Rutland was a junction point and the station was open 24 hours a day, 7 days a week, the business volume was greater than at other stations and the pay was correspondingly higher. Although this system was changed in later years, it made the agent’s job a desirable one in the early days.

Two agents occupied the Rutland depot for more than half its history. Lewis Schuster took over the depot in 1922 and was the agent/telegrapher until he retired in 1947. Earl W. Anderson became agent at Rutland in 1947 and served in that capacity until he retired in 1976. During Anderson's tenure the depot also became the unofficial city office and the local tax preparation and accounting center. By 1976 the Rutland agent was also handling the business of every station on the Aberdeen and Forbes lines. Ralph Glaser of Ellendale was the last agent to serve Rutland on a personal basis. Since 1980 any railroad business has been conducted by phone with people who don't know beans from barley and neither know nor care about the communities they are supposed to serve. In 1997 Burlington Northern sold its track from Campbell MN through Cayuga, Rutland & Havana to the Red River Valley Western Railway (RRV&W) Company of Wahpeton. The RRV&W ran for several months, but high water in the Summer of 1998 damaged the track east of Rutland and no trains have run on the line since that time. The Great Northern had remodeled and renovated the depot in 1958 enlarging the office, improving the waiting room facilities and adding indoor plumbing. The old vertical siding was replaced with horizontal shiplap and the battleship grey color of the early days was replaced with glistening white. During the remodeling, evidence of some old time shenanigans was uncovered. John Bloomdale, Stellan Ahrlin, and others who had been around before the turn of the century, had told stories of an ingenious method which had been used to get around North Dakota's prohibition laws. Beer and whiskey, which was shipped in wooden kegs, was ordered from another state, usually Minnesota, which did not have prohibition. The goods would be shipped to a fictitious person, usually Ole Oleson, address Rutland. When the shipment arrived, it would be placed in the office until Mr. Oleson came to claim it. The young men would check the depot office every day and when the illicit booze arrived they would determine exactly where it was located on the office floor. The depot stood on wooden pilings and it was open underneath. During the night, with tubs, buckets and a brace and bit the thirsty boozers would crawl under the station, position their tubs and buckets according to the measurements obtained the day before, drill through the floor and the keg above, draining the brew into the waiting containers. They would then crawl out with their ill gotten booty and party until it was gone. Because Stellan was known to be a teller of tall tales this story was often greeted with skepticism. However, when the top floorboards were taken up, revealing the well worn original flooring, there were the holes, right where he said they would be.

For 100 years the Great Northern, later the Burlington Northern (BN), depot had occupied the same location, north of the tracks and east of First Street, in Rutland. The depot was used by the Aberdeen line section crew as office and warehouse from 1980 until 1986. BN discontinued the section and decided to dispose of the structure in that year. The City purchased the building from the BN for $100, one dollar for each year. A condition of the sale was that the building be removed from the railroad right of way.

On June 1, 1987, a moving crew, commanded by Nick Schmit, Wyndmere, picked the building up and moved it to a new location, one block south, at the corner of First and Arthur Street, in Rutland. The depot now faces east and is just south of the corner of First and Arthur Streets. Once the center for commerce and information in the community, the 28' x 60' structure is now in use as a Heritage Center for Rutland and vicinity. The present location for the depot was provided by the Rutland Community Development Corporation.

The old Great Northern depot now houses a collection of artifacts, photos and documents describing the history of this area and its people.

The City of Rutland owns the Rutland Depot Museum building.

Information compiled and written by Bill Anderson and Kathy Brakke 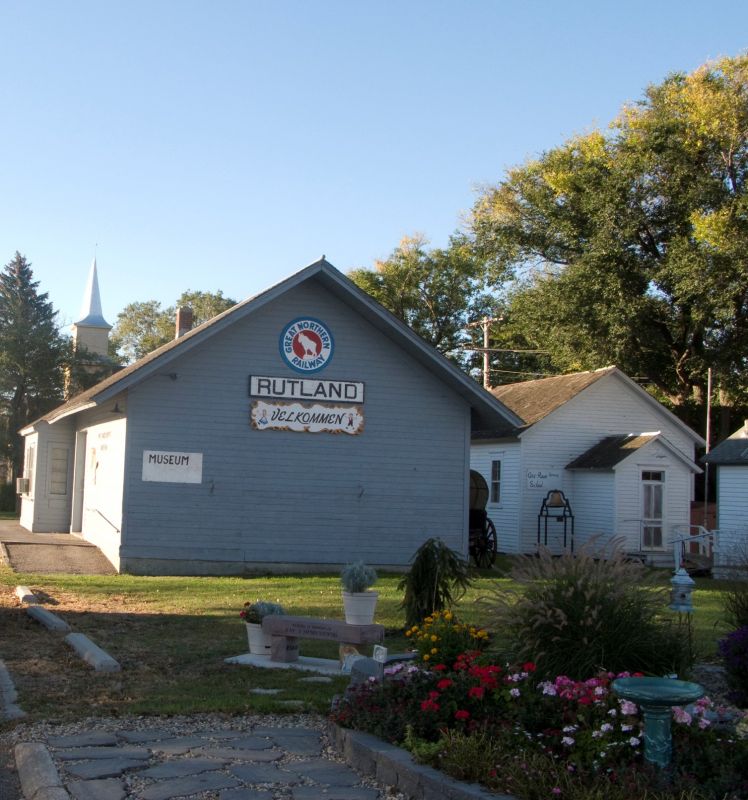